You can compare only 4 properties
Compare Reset

I don’t know about you, but I’m certainly going to sleep better at night knowing Canadian rapper Drake is sleeping on a mattress that costs more than most houses.
According to Architectural Digest, which took a tour of Drake’s ostentatious abode for their April edition, he sleeps on a custom-designed Swedish number by luxury bed makers Hastens.
With it’s equally astentatious name – The Grand Vividus – and equally ostentatious price of US$400,000 (GHC2.3 million), he hits that mattress to “decompress” after a long, hard day of being incredibly rich.
“[It’s] where I open my eyes to seize the day,” Drake said.
Who wouldn’t wake up like a king knowing they could blow the cost of 219 return flights to the UK on something they spend eight hours a night drooling into?

In the latest issue of @archdigest inside rapper Drake’s House, a Grand Vividus is shown in the bedroom. “The bedroom is where I come to decompress from the world at the end of the night and where I open my eyes to seize the day,” @champagnepapi #Hästens #Hastens #FerrisRafauli #AD #grandvividus #architecturaldigest www.hastens.com/Grand-Vividus

Not gonna lie, I was tempted to answer the question implied my headline up there with, “Because he’s got more money than sense, obviously”.
But let’s give old Champagne Papi the benefit of the doubt and really drill down into this bed-that-costs-as-much-as-a-house thing.
According to The Guardian, the bed was designed by Ferris Rafauli and takes 600 hours make, equaling about one month’s work for the four-person team that builds the things.
That accounts for the months-long waiting list this bed has despite the price, according to Forbes.
They spoke to a sleep specialist who recommends the elite beds to his high-powered clientele because, “their sleep is worth millions and millions of dollars because if they can get high quality sleep, they can turn that into big bucks”.
Some about that equation doesn’t quite add up, but OK.
The basic mattress “only” costs US$190,000 (GHC 1.09 million), which actually seems reasonable compared to what Drake shelled out for the custom job, but is still completely and utterly crackers.
To put it in perspective, my bed cost $400 on sale for the base and the mattress, and I worried I was going overboard spending that much.
But then my bed doesn’t come with 25 years of free flipping and massaging by the Hastens service team or have a hand-stitched, tufted-leather headboard with whisky bar tucked in above it.
Vice grilled Hastens’ LA “Sleep Spa” manager Linus Adolfsson about the beds and it turns out they’re really “museum pieces that you might have the priviledge of sleeping on”.

“In Sweden, if your couch costs more than your mattress, people wont understand. We have a completely different attitude to sleeping.”
Firstly, who’s sitting round having conversation about how much their beds and couches costs?
Secondly, forget not understand the bed-couch price ratio, the man is sleeping on more than a million bucks. We breezed through Understanding Land long ago.
Perhaps a bed that cost as much as 10 top-of-the-line Toyota HiLux utes makes more sense if you take a look at Drake’s home as a whole?
Also designed by Rafauli, the star’s 465sqm home has triple height ceilings, US$20,000 crystal chandelier and marble, so much marble – his bathtub is carved from one huge rock of the stuff – all reflecting an austere-yet-lux beaux arts/art deco vibe.
There’s a pool and two-storey closet that AD describe as having “amethyst hardware and seating upholstered in diamond-tufted shearling with polished nickel studs” for his sneakers and collections of US$30,000-a-pop Hermes Birkin bags. So maybe not.
It also has an official NBA sized basketball court. Because, why the hell wouldn’t it?
Luxury style watchers HighSnobriety called the bedroom “monumental”, which is fitting for a place that has appeared in a couple of Drake’s flashier music videos and has the nickname “The Embassy”.
If he ever starts handing out passports, “I’ll take two.
This story originally appeared on stuff.co.nz

View all posts by Ohmyproperty

How to choose a washing machine and use it properly 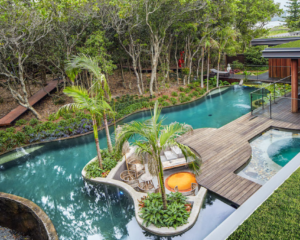 Sign up to our Newsletter For the latest GH property news, advice and exclusive offers!